Timbercreek has an interesting history.

Fortunate for us, Jim Dunne (former member of the Board) saved a lot of the material and was gracious enough to leave it behind for our enjoyment when he and Betty moved to Jacksonville about 2000. Pat and Winnie Hyndman have also furnished material.

We start off with a picture from inside the folder of promotional material.Yes, some of our current residents did indeed camp out to try and get the Timbercreek lot of their choice.

For starters, we begin with the promotional tent picture. There is a table at the bottom of the picture for you to select more subjects from historical Timbercreek. 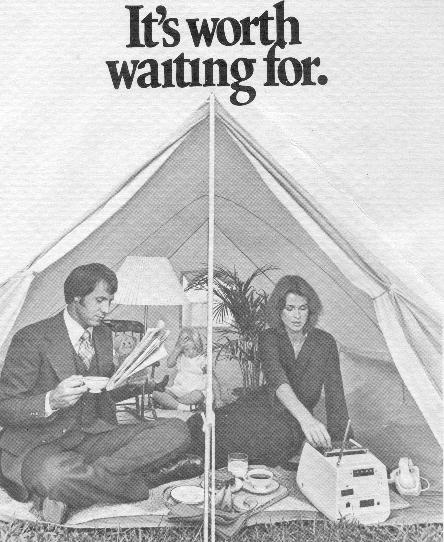 Unlike some $55,000 to $85,000 houses, you can't move into a Timbercreek house today. But when you do, you'll get more than a house. You'll have the neighborhood atmosphere and amenities of an Arvida village.

Close to Boca Raton shopping (including the new regional shopping center just 5 minutes away) and you'll only be a mile from I-95 which puts you within an easy drive of all the great attractions of South Florida.

The people who bought at another Arvida village called Paseos thought these things were worth waiting for. Talk to them, take a look at their homes, ask them about living in an Arvida village. That should give you an idea what's going to happen at Timbercreek.

Photo courtesy of Jim and Betty Dunne - The 23 hundred block of NW 29th Road looking east from what would become Hyndman's front lawn (2383) all the way down to Hurley's lot (2348).